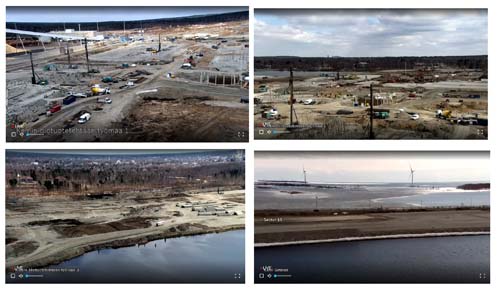 It is now possible to follow via web camera the progress of the construction work of the port warehouse for the Kemi bioproduct mill project at the Ajos harbour. In addition, three previously installed cameras in Metsä Group’s Kemi mill area capture the current key areas of the bioproduct mill construction. You can find the broadcasts at www.metsafibre.com/webcamskemi. The cameras transmit a live real-time image around the clock.

Metsä Group’s Kemi bioproduct mill project is progressing as planned. During the construction phase, the mill’s employment effect is estimated at nearly 10,000 person-years, of which more than 50 per cent will be in Kemi. The total number of employees working during the construction phase is estimated to be about 15,000. The investment in the new mill will secure the 250 jobs at the current Kemi mill for the coming decades. Through its direct value chain, the new bioproduct mill will employ around 2,500 people in Finland, some 1,500 more than the employment effect of the current Kemi pulp mill. The bioproduct mill project’s degree of Finnish origin is estimated to be high, at about 70 per cent.

Totalling EUR 1.6 billion, the investment in Metsä Group’s Kemi bioproduct mill is the largest in the history of the Finnish forest industry. The mill will produce 1.5 million tonnes of softwood and hardwood pulp per year, as well as many other bioproducts.