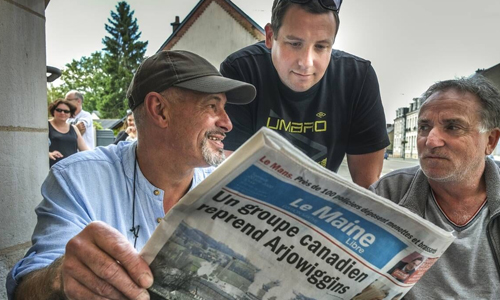 Paper Mill Industries (PMI), a subsidiary of the Canadian group Dottori, plans to reindustrialize the former papermaking site of Bessé-sur-Braye (Sarthe), in France. It also plans to hire 240 people over the next five years. This decision was made public last Friday by the Commercial Court of Nanterre, near Paris.

The jobs will in priority be offered to former employees of Arjowiggins Papiers Couchés. Arjowiggins employed 566 employees on this site. All of them were dismissed for economic reasons. “We are proposing to reindustrialize the old Bessé-sur-Braye papermaking site in order to revitalize the regional economy and bring new sources of attractiveness to the territory, using industrial projects based on the fundamental principles of sustainable development and using existing industrial tools. We will use local resources, train the region’s assets, and redistribute the results in the regional employment pool, while subscribing to a circular economy approach that minimizes ecological impacts”, affirms Pierre Petit, President of PMI, quoted in the press release issued by judicial administrators.

“The revitalization of the site by the company PMI is based on the development of several projects: wood activity, recycling of textile fibers, production of sustainable paper, art and safety”, the text continues. “Finally the company intends to create an incubator to allow start-ups to develop their projects and integrate their innovations in the industry of the company PMI”.

PMI is a subsidiary of the Dottori group, which is a major player in the Canadian forest industry. Created in 1972 by Frank Dottori, now managing director, the Dottori group is specialized in the wood industry (forest products and paper in particular). Arjowiggins was a subsidiary of the Sequana paper Group, placed in liquidation by the Commercial Court of Nanterre in May 2019. V. L.