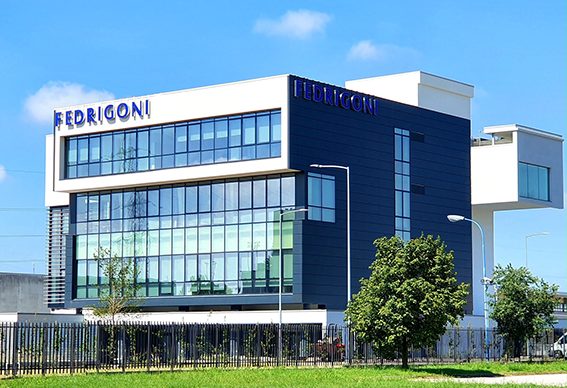 “The Covid19 health emergency has imposed corrective measures and some sacrifices, but we have never taken a step back on our investment and development commitments to grow the group”.

Even at the height of the crisis, this was Fedrigoni CEO Marco Nespolo’s position.  The unveiling of the new company headquarters in Verona of one of the leading global producers of speciality papers for packaging, publishing, self-adhesive labels and securities, further confirms this position. “It has been in the pipeline for a while and we wanted to deliver despite the difficult circumstances,” continues Nespolo, “because we need a workplace that suits our size, and that is innovative and comfortable enough to host all our people, whilst contributing to the collaboration and sharing of ideas and solutions.”

The building, which covers four floors and measures 5,150 square metres, will accommodate all 150 employees from the historic viale Piave site and the via Tombetta branch, and will include all company departments, from the commercial, logistics, IT, marketing, human resources, administration and finance departments, to the quality, safety and environment department. Production will remain in the plant next to the Camuzzoni canal, which was founded in 1888 and renovated after a fire in 2015, and in the Buttapietra warehouse. South Verona is the group’s historic home, and the building in via Enrico Fermi contributes to the redevelopment of the new industrial area close to the A4 South Verona motorway exit.

The building is extremely high tech, comfortable and energy efficient, in line with Fedrigoni’s long held commitment to environmental sustainability and the well-being of individuals. Numerous new functions reduce its environmental impact,  giving the building an A3 energy efficiency classification: the building automation system allows the position of window blinds to be adjusted remotely, making the most of natural light and combining it with artificial light when necessary; a system of solar panels guarantees 70% energy autonomy and 5 charging stations encourage the use of electric cars.

Meeting rooms host the latest multimedia video conferencing systems, and CO2 detection sensors indicate when the air needs to be changed. The break area on the second floor overlooks a “vertical garden”, which is watered with an automatic irrigation system. A green wall, visible from all offices, covers one side of a “hollowed out” parallelepiped at the centre of the building, and runs from the second floor up to the fourth, with the other three sides closed by panes of glass.  This was just one of the many solutions developed by the Giovannini di Trento Group to support the well-being of employees, along with a choice of open spaces and offices surrounded by glass walls to allow plenty of light.  But the real star is the beautiful paper that can be seen and touched from the minute you enter the building, along with labels and many examples of how customers use the paper, which are a continuous source of encouragement and inspiration.

Fedrigoni is a company that has strong ties to the area, and to Verona in particular, where it was founded in 1888 by Giuseppe Antonio Fedrigoni.  It was followed by the Trentino paper mills, Arconvert for the production of self-adhesive papers, the first overseas acquisitions and the Fabriano production sites in the Marche region, with their 750 years of history. “Owners and employees have always worked together,” states Chiara Medioli, the group’s VP and a member of the Fedrigoni family, “through two world wars, fires, earthquakes and economic crises. We have never stopped.  With new partners and new offices that suit our size, we are still working with the same commitment and quality to achieve our targets.  The Fedrigoni motto is the same as the Della Scala family’s:  Nec descendere, nec Morari, Never give up, never stop”.

Since 2018, Fedrigoni Group has been owned by the US investment fund Bain Capital. This has led to considerable growth, reaching 4,000 employees in two years and approximately €1.6 billion in turnover, also thanks to the strengthening and internationalisation of the management team, the development of increasingly efficient and eco-friendly products, as well as investments in technology and targeted acquisitions such as Cordenons, manufacturer of fine and technical papers, and Ritrama, an Italian multinational producing self-adhesive products (a sector in which Fedrigoni is the third largest player).  The goal is to complete the range by conquering new markets and developing products for high value-added segments where the company is already a leader, such as in packaging for cosmetics and luxury fashion brands, as well as labels for the wine making industry.

Last week the viale Piave building on the Gianfranco Fedrigoni corner, which has been home to Fedrigoni for nearly 70 years, was vacated by employees.  It was bought in the 1950s and its Umbertino-style dates back to the 1800s when the paper mill and the Consolaro Mills, with their offices and representative office in the building, overlooked the Camuzzoni canal.  Over time the company tried to adapt the space to the growth of the group, but by the 2000s the construction of two buildings in via Tombetta had to take place.