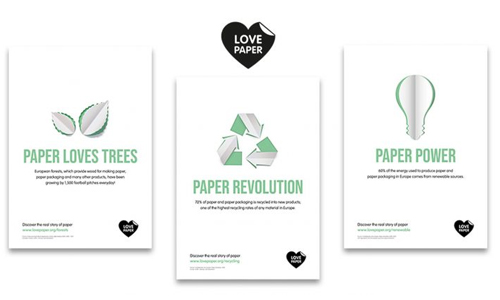 Paper advocacy group Two Sides has announced a significant relaunch of its successful ‘Love Paper’ campaign. Love Paper is part of a global initiative to increase consumer awareness of the sustainability of print, paper and paper packaging.

The Love Paper campaign relaunches at a time of unprecedented media and public debate about sustainable products, materials and packaging.

As consumers and brands become more conscious of the environmental impacts of the products and packaging we use; paper and paper packaging are increasingly recognised for their unique sustainable features: made from renewable raw materials, recyclable and biodegradable.

Greg Selfe, Country Manager for Two Sides UK, says, “Never has there been such widespread attention on the environmental credentials of the products and materials we use. The plastics debate, ignited by Sir David Attenborough’s Blue Planet 2, has fuelled a seismic shift in both public and business attitudes towards sustainability. This debate has led more people to appreciate that paper can be an environmentally-sound choice for reading materials, communications and packaging solutions, but there is still a significant underestimation of just how sustainable paper and paper packaging is.”

A 2019 survey commissioned by Two Sides found that a staggering 63% of European consumers believe European forests are shrinking in size. In fact, these forests, which provide 90% of the fresh fibre used by the European pulp and paper industry, have been growing by an area equivalent to 1,500 football pitches every day. The survey also revealed that only a fifth of consumers are aware of paper and paper packaging’s exceptionally high recycling rate of 72%.

Despite some of these misconceptions about paper’s impact on the environment, surveys commissioned by Two Sides highlight a steady improvement in consumer attitudes. For instance, in 2016 just 5% of UK consumers believed European forests were growing. By 2019, this had increased to 11%.

Public perceptions about paper’s recycling rate have also been improving. In 2016 only 8% of UK adults surveyed understood the European paper recycling rate was over 60%. In 2019, this has increased significantly to 17%.

Selfe continues, “Although there is still a long way to go, it’s fantastic to see perceptions of paper continue to improve. We are confident the Love Paper campaign has played a significant part in this. Since its origin, the Love Paper campaign has reached tens of millions of consumers in the UK alone. This has been thanks to the support of newspaper and magazine publishers donating millions of pounds of advertising space. The Love Paper ads appear regularly in leading titles including The Times, The Sun, Evening Standard, Metro, Daily Mirror, Daily Mail, Financial Times, The Economist, and dozens of popular consumer and B2B magazines.”