According to French producers association Copacel, the European Regulation on deforestation and forest degradation “is overly complex, generates unnecessary costs and is a source of numerous legal problems” 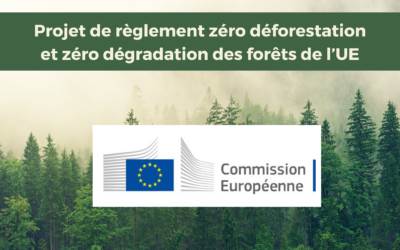 In a press release published on 22 December, Copacel* expresses, with strong arguments, its deep disagreement on the European Regulation on deforestation and forest degradation. Here it is in its entirety.

On 5 December, after just over a year of negotiations, representatives of the European Commission, the European Parliament and the Member States of the European Union reached an agreement on a regulation aimed at banning the marketing of products that contribute to deforestation or forest degradation. These products come from 7 raw materials (cattle, cocoa, coffee, palm oil, soya, rubber and wood) and are included in a list of wood products such as cellulose pulp, paper and board, paper and board products (bags, boxes, toilet paper, notebooks, labels, etc.) as well as printed products (magazines, books, etc.)

This regulation, which will be formally published in the first half of 2023, will become enforceable against companies (non-SMEs) 18 months after its publication, i.e. towards the end of 2024 (and mid-2025 for SMEs). This text will replace the European Union Wood Regulation (EUWR), whose objective, since its adoption in 2013, is to fight against imported deforestation.

The French paper industry strongly supported the EUWR during its implementation, and is very much in favour of the implementation of a well-designed regulation to fight deforestation, as the marketing of paper products that would not take this imperative into account goes against the CSR policies of companies and constitutes, in addition, an economic (distortion of competition) and image damage.

However, despite repeated warnings from Copacel, « the regulation that will soon be implemented will quickly appear to be a bureaucratic monstrosity, generating perverse effects in forest management, a source of complexity and additional costs that could have been avoided without weakening the desired objective.»

These shortcomings of the regulation relate in particular to the integration of the principle of traceability, the centralisation of information, the definition of forest degradation and the absence, during the implementation of the text, of differentiated treatment between the countries of origin of the products.

The principle of traceability imposed by the regulation requires, for each product (a book, an envelope, etc.), to go back up the value chain and to obtain the geolocation of the forest plots from which the wood used comes (art. 9.d), as well as the date of its harvest. This approach poses numerous legal and technical difficulties, particularly for continuous processes and those involving blending. Several hundred plots will have to be declared as potential sources for a ream of A4 paper (rather like a deep fryer, where a fry can only be linked to all the potatoes that have been used).

The principle of centralisation of information (art. 4.2 and art. 41) will oblige each company, when selling a product, to fill in a European register, in order to include in this information system the name of its customer, and all the characteristics of the product sold (quantity, geo-referencing of the plots, etc.). Like the previous principle, this obligation involves many legal and technical difficulties.

The definition of forest degradation (Art. 2.6) is taken in a broad sense, and includes the conversion of naturally regenerating forest or coppice into a plantation. To the extent that wood from these plantations will be illegal (if the plantation was established after 31 December 2020), conversion will no longer be possible for owners, which will have a negative impact on the wood harvest in France and reduce silvicultural options.

Finally, it is regrettable that, when implemented, the regulation will lead to the application of the same rules for all products, whether they come from European forests or from countries where deforestation practices are actually being deplored. “Our industry is very much in favour of a regulation that will allow us to fight against imported deforestation, said Philippe d’Adhémar, President of Copacel. It is a pity that an objective shared by all leads to a regulation that will go down in history as an example of a particularly ill-conceived public policy, as it is overly complex, generates unnecessary costs and is a source of numerous legal problems.