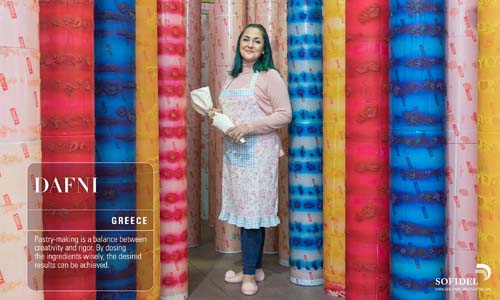 The end of the year is calendar time for Sofidel, a global leader in the production of tissue paper for hygienic and domestic use, particularly well–known in Italy and Europe for its Regina brand. The “We, Sofidel. Our Passions Fuel Our Future” project puts the Group’s peoplecenter stage. The calendar features one person from each of the 13 countries in the world where the company operates.

Sofidel dedicates the 2023 company calendar to their talent and to the passions that enrich each of their lives, whilst also nourishing the company with curiosity, sensitivity, and intelligence. The more than 6,600 members of the Sofidel community were each invited to apply to talk about what they like to do in their spare time. So many people responded, with hundreds of photos and videos. Pictures of sports, art,music, DIY, gardening, cooking, and much, much more.

An external jury* then had the task of selecting 13 of them from the submissions received. These 13 were read and interpreted by photographer Pietro Paolini, founder of the “TerraProject Photographers” collective and winner of the World Press Photo in 2012 and the Marco Pesaresi Prize for contemporary photography in 2013.

The shots were set in Italy, in the production spaces, both of the paper mill (first phase of production: from raw material to paper) and the converting plant (second phase of production where the finished product is made: toilet paper, household paper, napkins, paper handkerchiefs, facial tissues, etc.). The link that unites the people, their talents and their commitment, to an idea of integral and responsibledevelopment was thus made more explicit.

Thus, were born the portraits of Sean, a production technician from the UK who is passionate about acting; Fabrice, a shift manager in a French plant who is also a champion weightlifter; and Els, a human resources specialist in Benelux who loves food. Then, of course, there’s everyone else…Pietro Pasolini’s approach was imaginative and amusing. He played with details referring to each of the individual’s passions, recreating an effect of decontextualization with respect to the industrial settings.

Elena Faccio, Sofidel Creative, Communication & CSR Director said, “‘We, Sofidel’ is a project in which we believed from day one. We wanted to turn the work tool that is the company calendar into an adventure for discussion and sharing. Our company is made by our people. People from different countries and cultures who, together, have made and continue to make Sofidel an international company with founding values of sustainability, integrity, and mutual respect. “