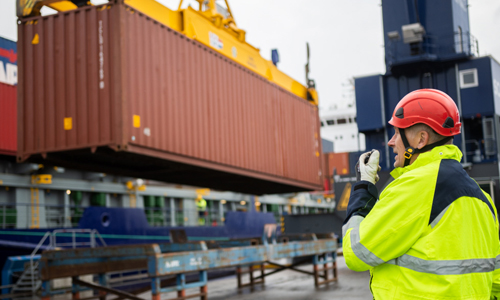 2019 was a good year for SCA Logistics with several records in terms of volume and efficiency. To that, also pleasingly, low figures for workplace accidents and a declining sick leave.

In Umeå, the number of containers increased by 16 percent compared to 2018. The trend is also positive with a steady growth of more than 10 percent per year since 2000.

“The result also means all-time-high at the terminal with a handling of more than 35,000 containers/TEU*. It is truly nice to summarize the results of our long-term and purposeful investment towards increased container volume”, says Margaretha Gustafsson, SCA Logistc’s terminal manager in Umeå.

“The record obviously requires us to develop safe and efficient solutions in the container process without losing focus on our customers. We do this by working in teams that encompass the entire process from incoming orders to delivery, and it has been a successful concept that has contributed to the fine results we see today”, continues Margaretha.

Continuous increase in call and efficiency in Sundsvall
In Sundsvall, there has also been volume increases, SCA Ship Agency set a new record in the number of managed vessel calls in the region in 2019 with 818 managed calls. An increase of 17 percent compared to the previous year.

At the same time, the productivity of the port has also improved significantly. When SCA bought out the stowage business in 2007, productivity was mediocre. At that time, new targets were set for the medium and long term.

“In 2013, we had increased productivity by over 25 percent and achieved our first goals, but the long-term goals still felt very difficult to achieve. However, in December 2019, we were pleased to note that our port operations had improved the productivity with 8 percent during the last year, says Peter Gyllroth, SCA Logistics terminal manager in Sundsvall. What felt theoretically 10 years ago was now becoming a reality in everyday life.

Great development for the health and safety work for SCA Logistics
In the past two years, the level of workplace accidents has come down to SCA Logistics’ lowest level so far, but safety is an ongoing work and the end goal is of course zero accidents. Also positive is that the longer sick leave has gone down in recent years and shows a good trend.

“Five years ago, I probably didn’t think it was possible with a zero level of accidents in a port business, but I think we all in the organization were greatly affected by SCA’s overall safety campaign, which goes by the name of Zero. In retrospect, I have actually begun to believe that with continued work we can get there. The combination of low sickness absence and fewer accidents is something we are happy and proud of”, says Magnus Svensson, President, Sourcing & Logistics at SCA.