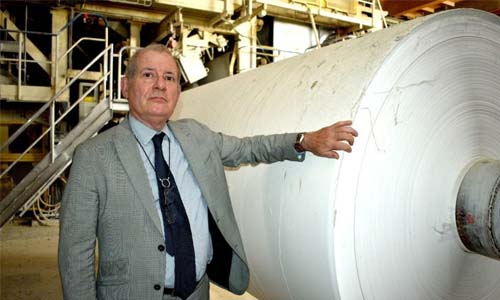 It looks like the end of all paper activity on the former French site of the Arjowiggins group in Bessé-sur-Braye, which was bought out in mid-2020 by the Paper Mill Industries group (PMI). The Kolmi Hopen group has announced that it will be setting up a new single-use nitrile glove manufacturing activity on some 20,000 m2 (i.e. around 20% of the total surface area of the buildings), the first in France in this speciality. These products are used by healthcare personnel as well as in sensitive industries such as the food industry.
Already established in the Pays de la Loire region, Kolmi Hopen specializes in the manufacture of surgical and respiratory masks and, more generally, personal protective equipment. Called ManiKHeir, this plant will manufacture up to 2 billion gloves per year. It will be the first site in France and the second in Europe to manufacture this protective equipment, of which the French healthcare system consumes more than 1.5 billion units each year.

Representing an investment of more than €40 million, this project will create 150 to 200 jobs in the first year and more than 300 in the long term. It is part of a process of relocation and reindustrialization of production previously carried out in Southeast Asia, particularly in Malaysia. The State will support this investment with €10 million as part of the “Resilience” call for projects under the France Recovery Plan, while the Region’s contribution will reach €5 million.

At the beginning of June, the PM 3 and the coater on the site were being dismantled to make way for the new machines. The paper equipment will be sold outside the EU, in India and Turkey for example. PMI was in advanced negotiations with potential buyers, but no decision had yet been made. « After a year of reflection, it appears that no paper activity whatsoever will be continued on this site, explains Pierre Petit, president of PMI, who points out its distance from the major logistics hubs as well as the size of the paper equipment. As far as possible, the site will turn to decarbonization and could offer various activities such as energy production (hydrogen, photovoltaic farms, etc.). We are continuing to promote the site so that it becomes a source of employment and is much less fragile because it is multi-tasking. We remain the assemblers and facilitators. »