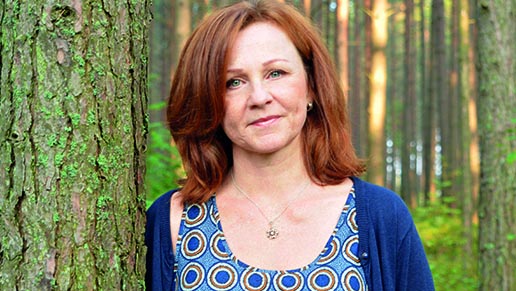 Paper Province’s CEO Maria Hollander was shortlisted for the European Cluster Manager of the Year award this week. “It is a great honour to be among the top three candidates for this prestigious award”, says Maria Hollander.

Making it to the finals of the European Cluster Manager of the Year award means participating in a pitching session at the European Cluster Conference in Bucharest. Paper Province’s CEO Maria Hollander shared the stage with the other two possible award winners – Bianca Muntean of the iTech Transilvania cluster in Romania and Lubos Komarek of the Nanoprogress cluster in the Czech Republic. The winner, announced at the conference banquette on 14 May, is Bianca Muntean for the cluster’s success in strengthening competencies of their member companies.
“I feel incredibly awarded just by qualifying for this prestigious award. Also, I am proud that I had a chance to share with the audience what Paper Province does for regional growth and the development of Swedish bioeconomy,” says Maria Hollander.
“It has been an inspiring two days here in Bucharest and even though I did not get to win the award this time it was a great honour to be among the top three candidates,” Maria Hollander continues.
Connecting clustersThe conference is arranged by units of the European Commission, industry partners and others, in collaboration with the Romanian Presidency of the Council of the EU. It is an open space for clusters, policy makers and stakeholders from all over Europe to meet and learn from each other.