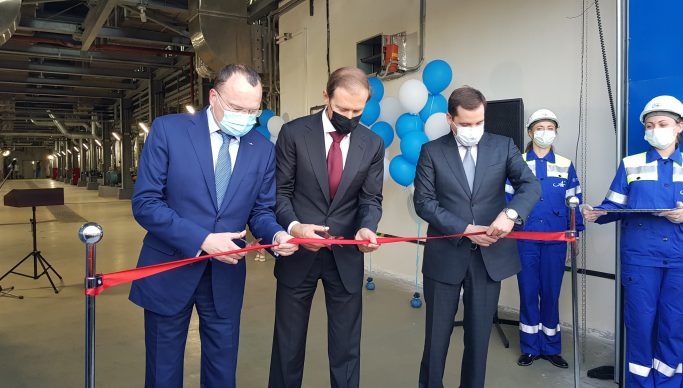 Last week, Denis Manturov, the Minister of Industry and Trade of the Russian Federation, and Alexander Tsybulsky, the Provisional Governor of the Arkhangelsk Region, participated in the opening ceremony of a new Valmet evaporation station at the Arkhangelsk PPM (APPM) worth 6.5 billion rubles (appr. €86 million).

“Arkhangelsk PPM is 80 years old, and on this significant date we are launching a new upgraded facility built as part of a priority investment project in the forest development,” said the Head of Ministry of Industry and Trade of the Russian Federation. “The mill has invested 17.5 billion rubles in its implementation, but APPM has no less ambitious plans for gasification and further implementation of BAT, although it is one of the greenest mills in the country in the field of ecology.”

Denis Manturov congratulated the staff of the Arkhangelsk PPM on its 80th anniversary and presented awards to the workers of the mill.

According to Dmitry Zyliov, the CEO of Arkhangelsk PPM, in the anniversary year, the mill completed a priority investment project (PIP) in the forest development, which was implemented in 2008-2020. He expressed confidence that such a large-scale rebuild of the APPM will certainly give a new impetus to our development, Novodvinsk and the region as a whole.

“Our PIP is a good example of coordinating the efforts of business, regional and federal authorities. The experience of interaction between the Arkhangelsk PPM, the regional administration and the Ministry of Industry and Trade of RF in the implementation of such large projects as ours gives us the right to hope that the new projects of the mill will be implemented using more effective tools and state support programs.” – concluded Dmitry Zyliov.

The capacity of the main equipment of the new evaporation station of APPM is 600 t/h for evaporated moisture.

The launch of the evaporation station will allow APPM to reduce water consumption by up to 50% at Board Production and air emissions by up to 65%.

In addition to the business component, the new evaporation station will also have a great environmental impact for the entire region.

As part of its construction, three fire tube boilers were installed, designed to burn foul-smelling gases generated during the cooking of semi-chemical pulp and at the evaporation station itself. The design treatment degree of the new station is 99.9%.

The second postulate of the new station of the Arkhangelsk PPM: “No emissions and no odors.” Valmet has created an integrated NCG system for the next generation evaporation station that can control (collect and burn) odor gases from over 100 odor sources.

As previously reported, within the framework of the APPM’s development strategy until 2025, more than 20 billion rubles will be invested in the development of production, and the total volume of pulp and semi-chemical pulp cooking will exceed 1,000 thousand tons per year.

However, with the growth of production output, the mill intends to significantly reduce the negative impact on the environment: to reduce water consumption by 50%, to reduce emissions by 65%, effluents – by 75%, GHG CO2eq. (1%) – by 18 thousand tons in relation to the start date of the production rebuild.