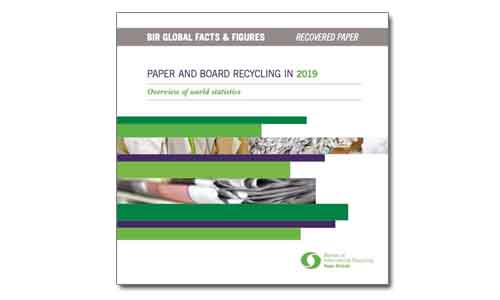 This is one of many key findings in “Paper and board recycling in 2019: Overview of world statistics”, the second edition of the BIR Paper Division’s revamped analysis of global statistics relating to the recovered fibre industry. The report explores not only production and utilization of recovered fibre but also major international trade flows, as well as key pulp and paper/board market information.

Based on data compiled with the assistance of the European Recycling Industries’ Confederation (EuRIC), RISI and CEPI, experts within the BIR Paper Division also make a number of reasoned calculations to quantify the fundamental role of recycled fibre as an environmentally beneficial component of global paper and board production.

“2019 brought an increase in the proportion of the world’s paper and board that was made from recovered fibre – from 50.27% in 2018 to 51.15% the following year,” points out Jean-Luc Petithuguenin, President of BIR’s Paper Division and CEO of France-based Paprec, in his introduction to the new publication.

Asia produced almost half of all the paper and board using recovered fibres, not least because of its leading role as a cardboard producer, while Europe achieved a recovered fibre incorporation rate average of almost 55%.

Despite its increasingly stringent import restrictions, China remained the world’s leading recovered fibre importer in 2019. Of particular note, Europe shipped more recovered fibre to India in 2019 than it did to China – a development that “none of us would have anticipated only a handful of years ago”, according to Mr Petithuguenin.

The 2019 data also underline significant emerging outlets for recovered fibre, notably Vietnam, as well as the continued strong market presence of other, more established buyers in Asia such as India and Indonesia, Mr Petithuguenin adds.