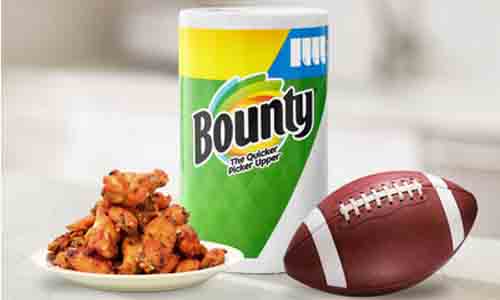 “Bounty and wings are the duo every football fan needs to have on game day, and we want to help make that possible. Because you can’t have football without wings, and you can’t have wings without Bounty,” says Janette Yauch, Bounty Vice President.

Another duo helping tackle wing mess is Emmitt Smith – three-time Super Bowl winner, Hall of Famer, and NFL’s all-time leading rusher; and Rob Gronkowski (aka Gronk) — four-time Super Bowl winner and former NFL tight end. Not only are they both wing enthusiasts, but they also know a thing or two about what it takes to survive post-season game days on and off the field.

“Living in Dallas, having a mix of BBQ and Buffalo chicken wings is the ultimate crowd pleaser at my house. Especially on game day,” says Smith. “Any time you’re dealing with saucy wings, it’s bound to get messy. That’s why I’m excited to partner with Bounty throughout this playoff season. I make my signature smoked wings myself before I toss them in any sauce, so from the kitchen to the couch, I make sure to keep a roll by my side to keep things clean.”

Later this month, Gronk will show that he still has a competitive edge with a wing eating competition with Bleacher Report featuring surprise NFL guests. They’ll all go head-to-head to see how many wings each person can put away, having Bounty on-hand for the much needed clean up.

“Nowadays I throw down on game days a bit differently, which usually involves Buffalo wings, blue cheese for dipping, and yep, Bounty,” says Gronk. “This is a perfect partnership because – likely not a surprise for most – I can get a bit messy when food is involved. So you can bet that I’m keeping a roll Bounty on the table whenever I have wings. With my wingspan, it’s always in reach to tackle any saucy drips and spills.”

Smith and Gronk will also join Bounty at Super Bowl’s Radio Row February 9-12, 2023, at the Super Bowl Media Center in Phoenix, Arizona. They’ll team up with other notable names in football to share why when it comes to wings, Bounty is your wingman.

This playoff season, football and chicken wing fans can save when stocking up on their favorite paper towels. Whether it be for a tailgate, a watch party or any given Sunday, be game ready with Bounty. Get $3.00 cash back when you buy ONE Bounty paper towel product ($10.00 retail value or greater) and chicken wings in a single transaction by submitting your receipt through iBOTTA. Offer valid through February 13, 2023 see app for additional offer details.