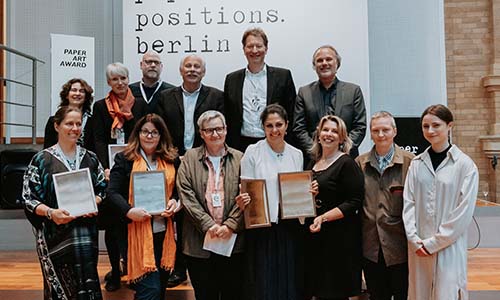 For the second time, outstanding works by international artists were honoured with the Paper Art Award at paper positions berlin, the world’s leading fair for paper art. For the first time, two female artists received the bronze award.

The opening day of the sixth edition of paper positions berlin came to a successful conclusion on April 28th 2022 with the presentation of the Paper Art Award. The high quality of the exhibited works of contemporary visual paper art was honoured by the jury in a special way this year. For the first time, the highest endowed art prize for sculptural paper art, totalling € 36,000, was awarded to four artists.

The jury awarded the gold prize to Afshan Daneshvar, represented by O Gallery (Tehran) for her outstanding works which are part of her “Boats series”. The artist has been working intensively with the medium of paper since 2015. She strings together tiny folded intact as well as deformed paper boats into a fabric-like sea of black, which can be read as a commentary on current events and thus have a deeply emotional impact.

The silver-prize was awarded to Goekhan Erdogan, represented by Galerie Heike Strelow(Frankfurt am Main). The Frankfurt-based artist is known for his sculptural approach toward paper as artistic material. His work is determined by the focus on his own portrait photo printed on paper, which he sometimes transforms to the point of complete dissolution.

This year’s bronze award is shared by Aja von Loeper, represented by Wichtendahl Galerie (Berlin), and Lisa Tiemann, who is represented by Galerie Schwarz Contemporary (Berlin). The works by Aja von Loeper, who works in Nuremberg, convinced the jury with the impressive interplay of light and textures that the artist wrings from the paper’s fibres in her “White Sheets” through such powerful yet careful mechanical processing. The jury saw comparable artistic accomplishment in Lisa Tiemann’s sculptures. Tiemann works in Berlin where she explores the boundaries of materiality and stability in her series of works named “Couples” by fusing ceramics and paper.