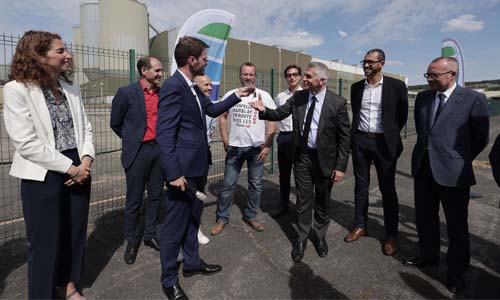 On 10 May, the former Chapelle Darblay site near Rouen in France, which has been closed since mid-2020, was taken over by the Rouen Metropolitan Council, which immediately transferred its ownership to Veolia. Nicolas Mayer-Rossignol, Mayor of Rouen and President of the Rouen Normandy Metropolis, handed over the keys to the plant to Jean-François Nogrette, Managing Director of Veolia France and Special Waste Europe, which took over the industrial site alongside Fibre Excellence, a market pulp producer with two plants in France (Tarascon and Saint-Gaudens). The ceremony was also attended by Pierre-André Durand, Prefect of the Normandy region, Prefect of Seine-Maritime, as well as the union representatives of the former employees, Arnaud Dauxerre, Cyril Briffault and Julien Sénécal, whose mobilisation has also been unfailing since the announcement of the site’s closure.

This ceremony was the culmination of a long series of events that led, on 11 February, to the Metropolis exercising its right of pre-emption in an unprecedented operation.

“The dismantling of this strategic site would have led many local authorities to bury or burn their paper waste rather than recycle it, or send it to Belgium and Germany,” reads the Metropolis’ press release, which also mentions “an ecological and industrial absurdity”. The mayor of Rouen also welcomed “a historic decision for ecology, the circular economy and reindustrialisation in France.”

With a total value of €9.6 million, the acquisition represents a virtually clean deal for the city, apart from the procedural costs (less than €100,000).

In March 2021, a broad coalition of 80 mayors (including Paris and Le Havre) and members of parliament (from all over France and from all political backgrounds) called on the President of the Republic to act in favour of maintaining the site and its activities. The plant had a recycling capacity of 480,000 t/year, the result of sorting the waste of 24 million people within a 400 km radius, including the Paris area. However, on 15 October 2021, the Supervisory Board of UPM France SAS announced its intention to sell the site to Samfi/Paprec.

Last October, Veolia announced plans to invest €120m to convert the machine from newsprint to Corrugated Case Material (CCM) using recycled paper and cardboard collected in France. The production capacity of this line was announced at 400,000 t/year. The energy required would be produced by a biomass cogeneration boiler fuelled by organic waste from the Normandy, Brittany and Hauts de France regions. This project will benefit from the respective expertise of each of the partners: Fibre Excellence for the production and marketing of CCM and Veolia for the collection and supply of recycled paper and board and the production of biomass-based energy. The project also aims to relocate 250 skilled jobs, relying mainly on the skills that were present before the plant was shut down.