The President of Estonia visited CMPC 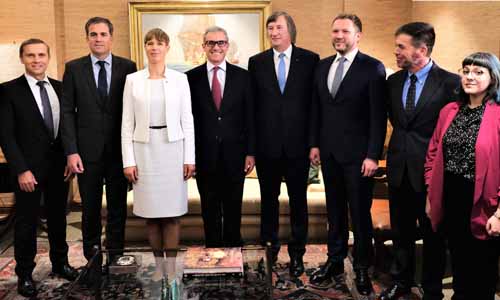 Kersti Kaljulaid, President of Estonia, – the youngest and first woman to take office in that country- arrived in Chile on January 15 for her first official visit to the country.

Among her busy schedule- she had meetings with President Sebastián Piñera and members of Congress – the President visited on January 16 the corporate building of CMPC, together with a delegation of 13 people, including the Estonian ambassador to Chile, Mart Tarmark.

The Head of State was received by the CEO of CMPC, Francisco Ruiz-Tagle, and the Corporate Affairs Director, Guillermo Turner.

At the meeting, which was headed by Ruiz-Tagle, the President was able to learn about CMPC, its operations, brands and purposes, but above all about its sustainability policy.

The Director of Sustainability of CMPC, Nicolas Gordon, presented the company’s Sustainability Agenda to President Kaljulaid, and pointed out the importance for forestry industry leaders to be forerunners of sustainable development.  “CMPC has subscribed to the UN Global Compact Sustainable Development Goals and develops and actively participates in projects and initiatives to contribute towards achieving them. For CMPC, sustainability is the number one goal”.

In addition, the chief of the Project Area of CMPC Forests, Julio Tobar, presented on how the Company has managed to reduce hours of work and facilitate its process of measuring log piles in the forestry sector thanks to a digital application of the Estonian company Timbeter.

At the end of the meeting, the CEO of CMPC thanked the President for the visit, giving her a handcrafted figure that represents a Mapuche machi (female leader) made out of sea holly, made by Ñocha Malen, a group of Mapuche artisans supported by CMPC.