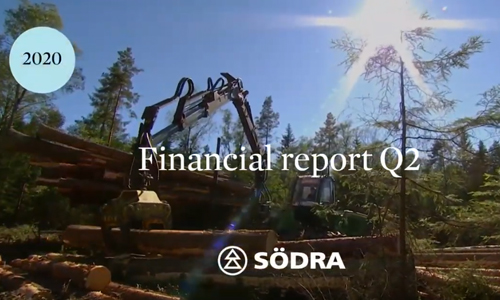 “The global outbreak of COVID-19 has led to a serious global crisis. The extent of the economic impact is uncertain, since both production and demand have declined globally. It is with great respect and gratitude that I see how we are continuing to work together to slow the spread of the virus, while simultaneously managing our day-to-day operations,” said Peter Karlsson, Interim President and CEO. “We are also looking ahead and the Board has decided to make additional investments as part of the plan to increase the annual production capacity of our pulp mill at Värö to 850,000 tonnes so that Södra can continue to grow profitability as we move forward.”

“Given the current market conditions, Södra posted a stable result in line with expectations for the first half of the year,” Karlsson added. “Net sales amounted to SEK 10,993 million (12,517) and operating profit totalled SEK 449 million (2,009). Demand for Södra’s core products was favourable, although prices for paper pulp and sawn timber were considerably lower year-on-year, albeit slightly higher at the end of the six-month period than at the beginning of the year.”

“The management of storm-damaged and spruce-bark-beetle infested forests has been a priority, but there will still be challenges to deal with in the coming quarters,” Karlsson continued.

“A key element of Södra’s strategy for sustainable and profitable growth is the efficient use of wood raw material. One example is the pilot facility that is now under construction in Tofte, Norway, the facility aims to develop both the process and the technology for liquid biofuel,” Karlsson added. “A full-scale facility for liquid biofuel production has then been planned. With this initiative, we are taking further steps towards a fossil-free future by processing forest products. At the same time, it is also important that politicians facilitate the use of the potential of forests in the transition to a sustainable bioeconomy.”

In the second quarter of 2020, Södra’s consolidated net sales declined 13 per cent to SEK 5,416 million (6,199) and operating profit totalled SEK 221 million (861). The lower profitability was due to lower price levels for paper pulp and sawn timber compared with the year-earlier period. The operating margin was 4 per cent (14).

Södra Skog’s operating profit for the period totalled SEK 51 million (79). The result was due to weaker margins. During the same period, Södra Skog acquired 4.3 million m³sub, comprising 59 per cent pulpwood and cellulose chips, 31 per cent saw logs and 10 per cent biofuels.