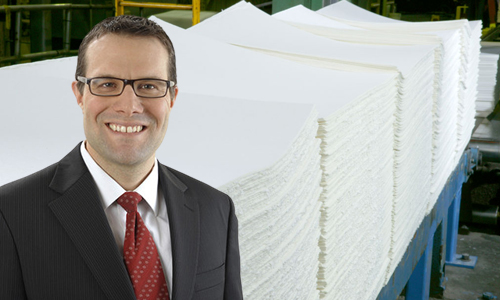 Resolute Forest Products Inc. today announced that after a 39-year distinguished career with Resolute, Yves Laflamme will be stepping down, and retiring, as of March 1, 2021. The board of directors has unanimously selected and appointed Remi G. Lalonde as the company’s next president and chief executive officer, effective on the same date.  Mr. Lalonde, 44, currently serves as senior vice president and chief financial officer. Upon becoming president and CEO, Mr. Lalonde will be appointed to Resolute’s board of directors. The announcement today coincides with Resolute’s third quarter 2020 results.

“The Resolute board of directors enthusiastically supports Remi Lalonde’s selection as the company’s next president and CEO. He has an outstanding track record of success as well as strength of character and exemplary personal integrity. Remi’s superior leadership skills demonstrated on a range of strategic initiatives have consistently impressed the board,” stated Bradley P. Martin, chairman of the board of directors. “Remi has very good relationships with our stakeholders, sharp analytical skills, impressive credentials, and a strong business drive. We are confident he will guide the company through its ongoing strategic transformation, delivering improved shareholder value. Remi is the right person at the right time for Resolute.”

As president and CEO, Yves Laflamme advanced Resolute’s strategic transformation, divesting non-core assets and using the proceeds for debt repayment, organic growth in the company’s pulp business, and acquisition of three sawmills in the southern United States. Recent results in Resolute’s tissue business reflect Mr. Laflamme’s commitment to continuous improvement. He has been a steadfast supporter in the development of internal talent, building a strong crop of future company leaders. During the COVID-19 pandemic, Mr. Laflamme has guided the company in exceedingly difficult times while generously supporting the communities in which employees work and live. Mr. Laflamme invested in the development of sustainable biomaterials, highlighting the added value Resolute brings to fiber. He has also remained committed to expansion of the company’s state-of-the-art Toundra Greenhouse joint venture, doubling its future production capacity. Mr. Laflamme is expected to continue to support the company and Mr. Lalonde in an advisory capacity after March 1, 2021, working on specific mandates.

“The board of directors express their appreciation to Yves Laflamme for a job well done. Yves reinforced Resolute’s vision and values, focusing on safety, sustainability, profitability, accountability and teamwork. His commitment to continuous improvement, particularly in the area of costs, serves as a model to the entire organization, including the company’s leadership team and board,” added Mr. Martin. “His leadership of Resolute and support of our operating communities set the foundation for shared prosperity. Yves’ unwavering commitment to workplace safety and environmental stewardship earned Resolute extensive North American and global recognition.”

“I am honored to succeed Yves Laflamme as Resolute’s next president and CEO,” said Remi Lalonde. “I first want to thank the board and our shareholders for their confidence in offering me the opportunity to assume the leadership of this company. I also want to thank Yves for his support and guidance. In my capacity as CFO, I am fortunate to work in partnership with Yves, and I sincerely appreciate the trust he has placed in me with important projects and the leadership role he has had me play in our overall development. I wholeheartedly believe that Resolute has a bright future. I am excited to lead this talented team of 7,000+ dedicated people as we accelerate the evolution of our business to generate long-term value for our shareholders and to drive sustainable economic activity in the communities where we operate. The road ahead is certainly not without its obstacles, which will require some tough decisions, but we are up to the challenge. I am confident Resolute’s culture, one of dedication, rigor, teamwork and setting high expectations, is exactly what we need to build on our progress.”

Mr. Lalonde has been with Resolute for 11 years, rising through a series of successive roles in corporate, manufacturing and senior leadership. He has been serving as the company’s senior vice president and chief financial officer since November 2018, after serving briefly as vice president for strategy, M&A, business development and procurement. Before then he was general manager for two and a half years at Resolute’s Thunder Bay, Ontario, pulp, paper and power complex. He initially joined the company as senior counsel, securities in 2009, and took on the additional role of vice president, investor relations in 2011. In 2014, Mr. Lalonde was appointed vice president and treasurer, before moving into operations in Thunder Bay in early 2016. He began his legal career at the law firm Sullivan & Cromwell LLP in New York City as an associate in the financial institutions and corporate & finance groups, where he worked for over six years. He graduated with a bachelor of laws from the University of Ottawa in 2003 and a bachelor of applied sciences in civil engineering from the University of Ottawa in 1999. Mr. Lalonde has led a number of important mandates for the company, and has represented Resolute in major negotiations with governments, private counterparties, unions and stakeholders. He is admitted to practice law in New York and Ontario.

“Remi represents the best of our Resolute culture; he works hard, welcomes collaboration and ideas of others, and believes in truly sustainable outcomes,” said Yves Laflamme. “Remi consistently delivers superior results. He grew rapidly within the Resolute ranks, taking on one challenge after another, and each and every time, he hit the ball out of the park. As we pass the baton, I am pleased for Remi and for the entire Resolute organization who will benefit from his capable stewardship and drive to succeed.”