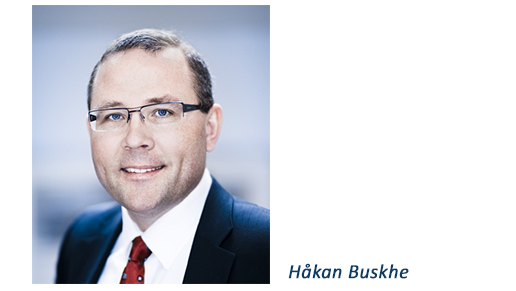 The Shareholders’ Nomination Board, established by Stora Enso’s Annual General Meeting (AGM), will propose to the AGM to be held on 19 March 2020 that the company’s Board of Directors shall have nine (9) members.

The Shareholders’ Nomination Board proposes that Jorma Eloranta be elected Chairman and Hans Stråberg be elected Vice Chairman of the Board of Directors.

Göran Sandberg has announced that he is not available for re-election to the Board of Directors.

“Göran Sandberg has during his tenure since 2017 been a valuable member of the Stora Enso Board of Directors. Göran has since his election acted as member of the Sustainability and Ethics Committee and contributed to its work. I would like to thank Göran warmly for all his valuable work for Stora Enso,” says Jorma Eloranta, Stora Enso’s Board Chair and member of the Shareholders’ Nomination Board.

Håkan Buskhe, M.Sc. Eng., Licentiate of Engineering, born 1963, Swedish citizen, has a strong industrial operative background and management experience having acted as CEO of several leading Swedish companies and as of 12 February 2020 as CEO of FAM AB. Prior to his current position Buskhe has acted as CEO and President of SAAB AB (2010–2019) and E.ON Nordic (2008–2010). Previous working experience further includes executive positions in E.ON Sweden (2006–2008), acting as CEO of the logistics company Schenker North (2001–2006) as well as several positions in Storel AB (1998–2001), Carlsberg A/S (1994–1998) and Scansped AB (1988–1994). Buskhe has further held positions as Board member in several venture capital companies. He is independent of the company but not of its significant shareholders due to his coming position as CEO of FAM AB. Buskhe currently does not own shares in Stora Enso.

The Shareholders’ Nomination Board proposes to the AGM that the annual remuneration for the Chair, Vice Chair and members of the Board of Directors by increased by approximately 2.5–3 percent and be paid as follows:

The Shareholders’ Nomination Board also proposes that the annual remuneration for the members of the Board of Directors, be paid in Company shares and cash so that 40% will be paid in Stora Enso R shares to be purchased on the Board members’ behalf from the market at a price determined in public trading, and the rest in cash. The shares will be purchased within two weeks from the publication of the interim report for the period 1 January 2020–31 March 2020 or as soon as possible in accordance with applicable legislation. The Company will pay any costs and transfer tax related to the purchase of Company shares.

The Shareholders’ Nomination Board proposes further that the annual remuneration for the members of the Financial and Audit Committee, the Remuneration Committee and the Sustainability and Ethics Committee be increased by approximately 2.5–3 percent and be paid as follows: