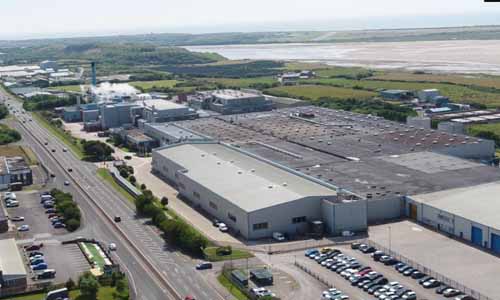 Kimberly-Clark, the international manufacturer of consumer products including  Andrex®, Kleenex® and Huggies®, has signed an agreement with Carlton Power to supply hydrogen to the company’s manufacturing facility at Barrow-in-Furness in the UK. This partnership will support the development of Carlton’s proposed Barrow Green Hydrogen scheme in Cumbria and reduce Kimberly-Clark’s reliance on natural gas as part of its global decarbonisation strategy.

The Barrow Green Hydrogen scheme, the first of its kind in Cumbria, was announced earlier this month. Carlton Power identified the opportunity and is leading the development in partnership with a regional public/private sector consortium – Cumbria Local Enterprise Partnership, Barrow Borough Council, Cadent Gas and Electricity North-West.

Barrow Green Hydrogen will provide Kimberly-Clark and potentially other energy-intensive users in the area (for example, those with transport fleets), with hydrogen to fuel their operations. This project will initially feature a 35 MW (megawatt) electrolyser, expected to produce approximately 3500 tonnes of hydrogen every year – reducing 25,000 tonnes of greenhouse gas emissions which is equivalent to taking 580 trucks off UK roads annually. The hydrogen will be produced by the electrolyser using electricity that is generated from sources of renewable energy, primarily wind and solar power.

The Barrow Green Hydrogen scheme is to be located on land adjacent to Kimberly-Clark’s manufacturing facility on Park Road (A590), Barrow-in-Furness. Subject to planning and financing, the £40M scheme is targeted to enter commercial operation in 2025.

The construction of the Barrow Green Hydrogen project is contingent on securing financial support from the UK Government via its Hydrogen Investment Package (HIP), a multi-million-pound programme to encourage the growth of the hydrogen economy in the UK. Kimberly-Clark and Carlton Power will work together to obtain grant funding and operational financial support from the Department of Business, Energy & Industrial Strategy (BEIS).  A submission to BEIS will be made within the next three months (see Notes to Editors).

The two companies will also work together on the various economic, technical, and engineering aspects of the scheme, as well as consultations with local and national stakeholders.

Kimberly-Clark recently announced plans to decarbonise approximately 80% of its electricity supply through a Power Purchase Agreement, which will lead to the construction of a new onshore windfarm in Scotland that will start operating in early 2023.

Eric Adams, Hydrogen Projects Director at Carlton Power said: “We are delighted to have entered a commercial agreement with Kimberly-Clark, who embrace the importance of green hydrogen in their operations at Barrow and potentially across their global operations. The development of green hydrogen projects like our
Barrow hub is critical if major energy users, like Kimberly-Clark, are to decarbonise their operations. At a regional level, our scheme forms part of Cumbria’s Clean Energy Strategy. It’s a catalyst to establish a hydrogen economy and drive the decarbonisation of local industry. We look forward to working with Kimberly-Clark and seeing Barrow Green Hydrogen as among the UK’s very first hydrogen hubs to enter operation.”

Dan Howell, Vice President & Managing Director, Kimberly-Clark UK & Ireland said: “Green hydrogen is a significant next step in decarbonising our operations and delivering our ambition of 100% renewable energy by 2030 in the UK and Ireland. Kimberly Clark aims to lead the way on sustainability and deliver our
purpose of Better Care for a Better World.”

Oriol Margo, Sustainability Transformation Leader for Europe, Middle East, and Africa at Kimberly- Clark said, “We understand the importance for us to lead in the development and deployment of effective decarbonisation strategies as our sector is energy intensive. This project will reduce the reliance on natural gas,
across our UK manufacturing facilities, by up to 30%. It is an exciting opportunity and demonstrates how cooperation among a wide set of stakeholders from business and government is critical to making green hydrogen commercially viable.”