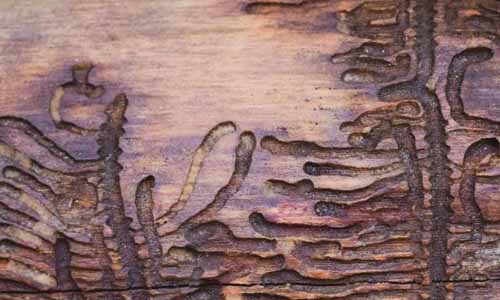 The spruce bark beetle has rampaged through the forests of southern Sweden, affecting many forest owners. In response, Holmen has developed an analytical tool, based on satellite images and artificial intelligence, showing actual damage on a map. Now, the forest company’s private wood suppliers can access one of these maps. A service that Holmen is first to come up with.

“This is highly valuable information to forest owners who are at risk of attack, or who already have infestation in their forest. That’s why we’ve sent an offer to the forest owners who we’ve done business with over the past five years and who we contact by e-mail. They have to get in touch with their wood buyers, who will provide the map. I’m very glad that we can offer this service entirely free of charge”, says Anna Baglioni, Head of Region, Holmen Skog South.

The maps are the result of an advanced analytical tool that Holmen has developed. An algorithm based on artificial intelligence has been continuously supplied with data until it has become highly proficient at analysing attacks using satellite images. The Swedish Forest Agency has for some time been offering risk index maps showing areas in the risk zone for attacks. Holmen’s maps show where the damage has actually occurred.

“We at Holmen are already using the tool for our own land holdings. This has enabled us to act quicker and more precisely than we would have otherwise been capable of. It’s a clear example of how Holmen is step-by-step developing responsible and digitally-enabled forest operations. On this occasion, for something as important as saving spruce forests”, says Sören Petersson, Senior Vice President Forest.

Yale solutions for pulp and recycling