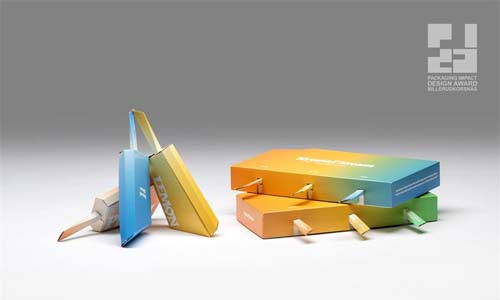 The winners of BillerudKorsnäs’ design competition PIDA Germany – Packaging Impact Design Award – have been selected. The most prestigious prize of the competition, PIDA Gold Award, went to the design student Hagen Neugebauer from Hochschule der Medien in Stuttgart who also won the prize “Highest level of Innovation”. The winning packaging project “Krystal Kream” is designed for a vegan Italian ice cream that impressed the jury with its innovative idea and construction. “It’s amazing. I’m stunned. I didn’t believe that this could happen. There was so much good work done by every group” says Hagen Neugebauer.

The winning packaging project “Krystal Kream” responds perfectly to this year’s brief – to create a package that speaks to our senses. The motivation of the jury reads:

“The overall idea was felt to be future-proof and ground-breaking, as many consumers would like alternative solutions for the packaging materials used today ­– also in this market segment. Use of materials, shaping, handling and differentiation from existing packaging solutions should enable the start towards a better future with this idea.”

Hagen Neugebauer who won the PIDA Gold Award at the German PIDA event automatically qualifies for the Grand Finale. At the final – which takes place at the Luxe Pack trade show in Monaco on September 27 – an international winner will be appointed. This means that the German winner will be up against the winners of the three other semi-finals; students from USA/UK, France, and Sweden.

At the event, another three prizes were presented. The winner of the PIDA Gold Award “Krystal Kream” was awarded once again and received the “Highest Level of Innovation Award” with the motivation:

”A packaging concept, which is still completely unknown for the relevant market segment, convinced the jury with the materials used, innovative design and functionality of individual components, which were consistently made from the same material through skilful construction”

The “Highest Level of User Friendliness Award” went to the entry “hey Ocean!” created by Nadine Voll and Judith Kellermann from Hochschule der Medien, Stuttgart. A packaging solution made for bath bombs, and the jury said:

“For this project, from the jury’s point of view, an overall concept was developed that takes the consumer with them from the beginning to the end of the story told by the product and accompanies them with various features. A packaging solution that, together with the product, surprises and delights the buyer in all phases of use.”

The “Highest Level of Sustainability Award” was presented to Vanessa Hoffer from Hochschule der Medien, Stuttgart for the entry “Miss Fortune”, a packaging solution for reusable razors. The jury’s motivation read:

“With the aim of replacing plastic blisters with a pure cardboard solution, a new packaging was created for reusable razors that not only fulfilled this goal, but also triggered all steps of optical and haptic perception and was also designed down to the last detail.  The tamper-evident closure, child safety and product fixation were also considered, as was the overall aesthetic effect of the pack through graphics, embossed areas and varnish effects.”

The winners were selected by a jury of prominent industry professionals, who were very impressed by this year’s contestants.

“The jurors were so impressed with the thoughtful and exciting concepts presented by the teams in this competition. We discussed and debated the entries at length before determining the winning team in each category. Each participant should be so very proud of the work accomplished under extraordinary circumstances,” says Helmut Sieber of Edelmann, chairman of the jury for PIDA Germany.

A creative arena for the packaging communityBillerudKorsnäs, the company behind PIDA, arranges the competition in cooperation with leading universities and design colleges in the USA, the UK, France, Germany, and Sweden. The competition gives the students an opportunity to work on a real packaging design project under the same conditions as an authentic assignment. What’s more, it is also a chance for the students to showcase their ideas and creativity to established professionals who attend the events every year to be inspired and meet the packaging designers of tomorrow.

“With PIDA, we want to drive the development of packaging design forward while also establishing a meeting place for the industry and the schools. This year marks the 16th anniversary of the competition and interest for PIDA grows steadily for every year – at the schools as well as in the packaging business,” says Anders Gathu, Marketing Manager BillerudKorsnäs.