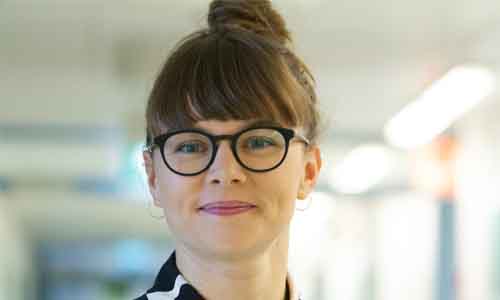 Dr. Ilona Leppänen, hailing from Finland, has been recognised amongst the world’s best young researchers working in forestry and forest product innovation. Her work tackles a global issue related to plastics for which no solution existed so far.

After winning prizes for her work at both national and European level, the 29–year old researcher has been selected to represent Europe in the next round of the international Blue–Sky Young Researcher Innovation Awards, a major distinction in the field of forest–based materials and processes research that is awarded biennially.

As part of the functional cellulose team at VTT, one of Europe’s leading research institutes, her work focuses on exploiting the inherent properties of this natural material. Most research on cellulose has so far been carried by forest engineers, but Dr. Leppänen is part of a new generation of chemists taking interest in cellulose.

Her aim is to make a film based on this biomaterial that works as a selectively permeable membrane, to filter the nanoplastics from the water flowing through it. According to the IUCN, at least 14 million tons of plastic end up in the ocean every year, and plastic makes up 80% of all marine debris found from surface waters to deep–sea sediments.

Nanoplastics’ effects are particularly worrying, as they disrupt the ocean ecosystems at the basis of the global food chain. Because of their small size, no good water filtering solution existed for them until now.

Dr. Leppänen’s innovation could find applications in washing machines or water treatment plants, capturing nanoplastics at the source before they reach the ocean.Dr. Leppänen was competing in a crowded field, with most research projects put forward looking into novel uses of forest products such as cellulose, which is today essentially used for papermaking. The next stage will see an international judging panel convened to assess the strength and potential of each entry, with three eventual winners receiving cash prizes and the opportunity to present their work at the ICFPA’s Global CEO Roundtable in early 2023.“This award is my biggest achievement so far. The inherent properties of cellulose have the potential to help us tackle some of the biggest global challenges.” Dr.Ilona Leppänen, Research scientist, VTT

“Dr. Leppänen’s research is a great example of the potential of products from the circular bioeconomy as superior alternatives to fossil–based products. It also shows very concretely that bio–based materials can be a solution to the global issues that an economy based on fossil materials has created.” Jori Ringman, Director General Cepi, Confederation of European Paper Industries and ICFPA President