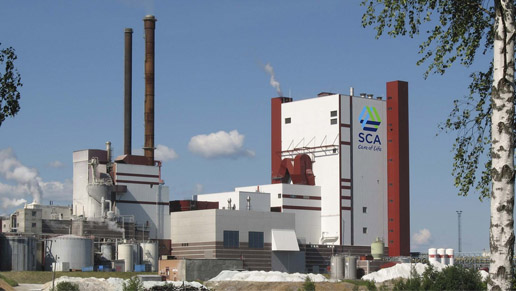 The project to establish a biorefinery connected to Östrand’s pulp mill is proceeding according to plan. In December, we announced that an important milestone had been achieved with the detailed development plan for the biorefinery gaining legal force. Now it is time for the next milestone – to submit the environmental permit application to the Land and Environmental Court in Östersund.

“Our mission in this phase of the project is to secure external permits granting SCA permission to establish a biorefinery in Östrand. The detailed development plan gaining legal force in December was an important milestone in the project. We believe this will make other permit processes easier, since the site’s suitability has been tested. The next step is to submit the environmental permit application to the Land and Environmental Court in Östersund this week. This relates to both a new environmental permit for the biorefinery as well as some amendments to the pulp mill’s environmental permit. In the permit for the biorefinery, we’re also applying for a water ruling that will allow a land extension into the water to make room for the facility. In total, we need around 23 hectares for the facility that we want to build,” says Roger Östlin, SCA’s Senior Project Manager for the project.

The production volume specified in the application of renewable hydrocarbon at Östrand’s refinery is more than the aviation fuel used for domestic flights within Sweden [1].

“Whether the hydrocrabons we intend to produce will be used as aviation fuel, petrol or diesel is too early to say. The biorefinery would create many possibilities. The products could even be used as raw material to replace other fossil products in society. There’s no doubt that this is a major environmental project,” says Anders Edling Hultgren, Biorefinery Manager within the Renewable Energy business area.

The project’s climate benefit is calculated to be a net greenhouse gas reduction of approximately 1,200,000 CO2equivalents[2] per year.

“Our ambition has been to submit as strong an application as possible to avoid substantial revisions later on. The authorities have an extensive amount of material to go through – 2,500 pages. A realistic estimate is that we can be called to a court hearing within one to one and a half years. Other permit processes are ongoing in parallel with this, for example to move power lines. If everything goes as we hope, we’ll have permission secured within a few years. I want to make it clear that no decision has been made within SCA that the biorefinery will be built. First and foremost, we need to have all of our permits in place before we can begin plans to build a new plant,” continues Roger.

Work has been conducted in close cooperation between different business areas at SCA and with external consultants.

“I’m relatively new at SCA, and I’m impressed with the warm reception I’ve received and the expertise and the collaborative climate here at SCA,” concludes Roger.

In addition to raw material from the forest, a biorefinery linked to Östrand could utilize residual products and locally produced green electricity from the pulp mill. The systems-based approach and ambition to close the ecocycle would mean a unique project for Timrå. This is completely in line with the company’s ambition to increase value generation of by-products from the forest and industry, creating conditions for profitable and sustainable growth.