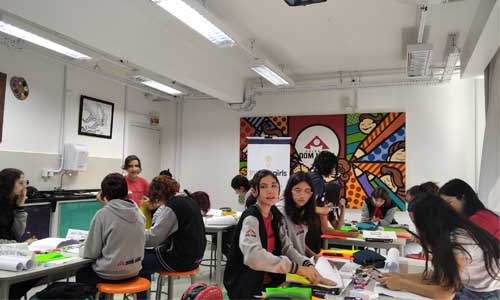 The partnership between the ONG Inspiring Girls International and Fedrigoni, fully committed to the issue of diversity, equity and inclusion, becomes even more international. Specific workshops will be held in the near future in middle and high schools in Spain, France, Brazil and Chile while the number of events organised in Italy will be multiplied. “We want to help young girls gain awareness of their potential, overcoming the gender stereotypes that hold them back”, says Fedrigoni’s Chief HR Officer, Monica Magrì. An undertaking shared by Fraffrog, successful illustrator and youtuber who took part in the Festival del Disegno in Milan, promoted by Fabriano, a Fedrigoni Group brand.

The partnership between Fedrigoni, reference global player in the production of special papers and self-adhesive materials, and the ONG Inspiring Girls International, committed to encouraging the ambitions of girls from 11 to 15 years of age presenting successful female role models, celebrates its first anniversary, with candles being blown out on cakes throughout Europe and South America. In fact, Fedrigoni is already preparing workshops that will involve students in middle and high schools in Spain, France, Brazil and Chile, and is starting again with the meetings in Italy, following the first successful events last year in two second and third year middle school classes at a school in Milan.

Girls and boys will be taken on a journey to discover the numerous professions that a company like Fedrigoni can offer, from the more technical to the more creative ones, firmly convinced that it must be passion and talent that guide young people in the choice of her career. Female managers will tell their stories and, through clues and interactive games, they will describe what they actually do, what path they followed to have a successful career, how they saw themselves when they were young, what gave them confidence and what they had to fight against. A looking glass for today’s adolescents who are often still victims of gender stereotypes that prevent them from thinking big, from stepping off the well-beaten track and from imagining their future career putting their talent at the centre. A workshop will follow during which each girl’s talent will shine through, with the help of facilitators.

And a successful “role model” is without doubt the youtuber and illustrator Fraffrog, who on Saturday 10 September held a creative workshop at the Castello Sforzesco in Milan within the context of the Festival del Disegno, the event that Fabriano (Fedrigoni Group brand) organises in towns the length and breadth of Italy every year to discover and re-discover drawing and its potential. The aim of the workshop was to help the participants mentally visualise and create a storytelling of their life in a drawing, with fun, inspirational and creative ideas, to build a narrative free from prejudices and gender stereotypes that negatively impact the ambitions of the new generations and their way of imagining the future. Francesca “Fraffrog” Presentini, 29 years old, won the YouTube NextUp in 2012 and has illustrated many children’s books. She is currently working with Elfgames on the video game Children of Silentown.

“We believe that every young girl should feel free to choose any career she considers right for her, without steering her education and career ambitions towards what is expected of her. As Fedrigoni, we want to give our contribution so that future generations think big, experiment fearlessly and feel supported in believing in their potential – says Monica Magrì, Chief HR Officer of the Fedrigoni Group -. The partnership with Inspiring Girls International arose from the desire to create awareness in young girls of their talent, freeing them from the gender stereotypes that bridle their ambition. The project falls within the context of the social responsibility programme undertaken with our people and the communities we work in on issues of diversity, equity and inclusion.”

“At Inspiring Girls, we passionately believe that every girl should feel empowered to choose whatever she wants to do in life, and creativity is often at the heart of this – says Miriam González Durántez, founder and president of Inspiring Girls International –. We are delighted to renew our global partnership with Fedrigoni, who are engaging with girls across the Inspiring Girls network in Italy, France, Spain, Brazil and Chile. The co-created ‘Elevate Your Creativity’ workshops encourage personal development through creative activities and inspire girls to think for themselves, which is hugely important for their careers and their future!”.

The ONG Inspiring Girls International was established in 2016 by Miriam González Durántez to raise the aspirations of girls from 11 to 15 years of age throughout the world: through successful female role models in a range of fields, from every country and walk of life, they see how they are free to aspire to any personal and professional goal.