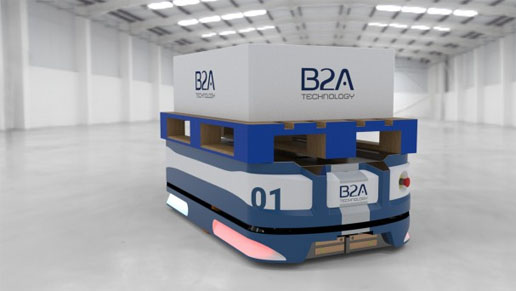 B2A Technology Group, resulting from the merger between Alstef and BA Systèmes, reports a consolidated revenue of €109m in 2018 for
its first year of operation, that is to say a 7% increase compared to the two companies’ combined revenue in 2017.
The order entries reached €122m and forecasts a turnover for 2019 of €132m, an increase of 21%.
Consolidated net income is €5.9m.
In 2018, the Group strengthened its presence in Russia with the start of the maintenance contract for the baggage system of Terminal B at Sheremetyevo Airport in Moscow and the order entry for the new Terminal C in the same airport. In addition, the Group has pursued its development in Canada with a mobile robot order for a major name of the cosmetics industry in Montreal. In France, the Group has won several intralogistics projects, including one for Castel Frères in Bordeaux area and the largest AutoStore® project in France for Manutan. The medical robotics activity has continued its development and represents 6% of revenues.
In the meantime, B2A Technology is preparing the future with the launch of two new mobile robots:
LoadStar for picking orders and BAGXone for baggage handling. In both cases, the objective is to offer more agile and dynamic solutions.
The Group’s growth dynamics required the recruitment of 70 people on permanent contracts in 2018, mainly to strengthen the design and maintenance teams. At the end of 2018, the total number of employees of the Group was 550, 26 of whom on apprenticeship contracts.