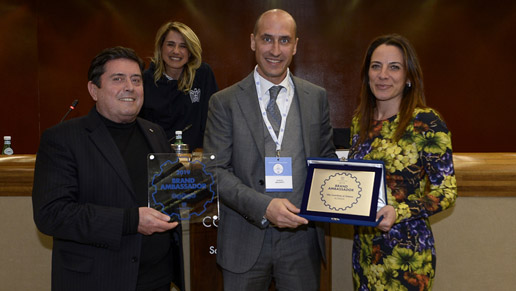 ACIMGA was named as “brand ambassador” by Confindustria following the association’s record performance in 2018 in the category “High Impact” – one of the “Best performers” of the Confederation among over 200 competing associations. During a ceremony held this week at the Confindustria headquarters located on viale dell’Astronomia in Rome, ACIMGA Director Andrea Briganti was presented the prestigious award based on the weighted average of number of member companies and number of employees – identifying the association having both the highest number of members and the largest member companies.

The award is even more significant as it rewards an organisation that started out on a small scale but over the last four years achieved a string of impressive performances: the number of members tripled from 27 to 70, the range of services was considerably enlarged and several successful initiatives were put in place in the exhibition industry. These include 9 international collectives a year, the creation of the Printech project promoting  internationalization by targeting the most promising South-East Asian countries in partnership with UBM ALLWORLD (a world-leading organisation in the exhibition industry) and the implementation of Industry 4.0.

“We have been working towards making the association less focused on individual companies and increasingly oriented to service and sharing to bring it in line with Confindustria’s guidelines – explained Briganti. In addition, for two years now ACIMGA has been a member of the Paper Graphic Federation, where it plays a specific role in promoting internationalization and Industry 4.0”.

In addition to increasing its member base, ACIMGA’s new course of action includes a series of initiatives indicative of a new way of interpreting its role and representativeness. In 2014, starting from Germany, the Association launched the Industry Meetings with the purpose of encouraging a dialogue between machinery manufacturers and upstream and downstream industries on issues such as production and innovation. A unique example among all Confindustria associations, the initiative was followed up by a specific event held during Expo 2015 and the Print4All Conferences – annual meetings gathering the leading players in the industry in connection to the exhibition Print4All. The Association’s new exhibition format, at its debut edition in 2018 Print4All far exceeded all of the indicators used to assess the success of a trade event: 35,000 visitors on a total surface area of 15,000 square metres, over 400 exhibitors of which as many as 40% from outside of Italy and, most importantly, an extremely high degree of overall satisfaction among participants. The next edition of Print4All is already scheduled for 2021, again as part of the Innovation Alliance also including several other exhibitions such as Plast, Ipack Ima, Meat Tech and Intralogistica Italia. The annual Print4All Conference is set to take place at Fieramilano in just a few days – 21 and 22 March.